The goal of ACTIVE was to test the effectiveness of three cognitive interventions (memory, reasoning, and visual speed of processing) in maintaining cognitive health and functional independence in older adults. The targeted abilities– memory, reasoning, and speed of processing—were selected based on evidence that they exhibit relatively early age-related decline, beginning on average in the mid-sixties, that interventions have been shown to be effective in training these abilities, and that performance on these abilities is associated with performance of cognitively demanding instrumental activities of daily living, critical for independent living.

The conceptual model that informed the design of ACTIVE was based on prior evidence showing that cognitive training would be domain specific. That is, each intervention was expected to result in specific improvement on measures of the trained ability relative to the other interventions and control group. For example, training in memory was expected to improve memory function (the proximal outcome) but was not expected to improve reasoning or speed of processing skills. On the other hand, intervention effects were expected to show some level of general transfer to daily function (the primary outcome) based on the critical assumption that declines in cognitive function lead to declines in activities in daily living. In other words, improvement in cognitive ability should result in maintenance of functional independence. In turn, maintained functional independence could result in a positive cascade of effects including improvements in quality of life, mobility, and health service utilization. 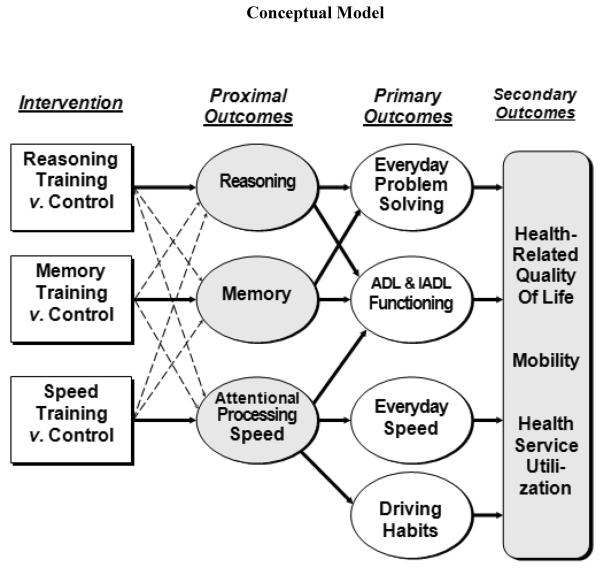